You are here: Home / The BAM Review / agriculture

Growing up in Iowa, the agricultural heartland of the United States, I was surrounded by farms. I remember childhood summers milking cows and “walking beans” (walking between rows of soybeans to pick weeds) on my grandparent’s farm. I saw how the farm put food on the table, as I always enjoyed a cold glass of milk from the dairy after chores.

After college, I began to understand agriculture from the perspective of small-scale farmers in Kenya. I worked for two years alongside women who spent long days in their fields to not only put food on the table, but also to earn an income for their families. Everything from buying school uniforms to medical services relied on their farm’s output.

And this is not unique to Kenya. Traveling the globe with Partners Worldwide, I’ve continued to witness the centrality of agriculture in many countries and communities where we work, from subsistence farmers to thriving cooperatives.

Agriculture: A Primary Occupation of the Poor

While employment in agriculture is declining overall, agriculture is still the primary occupation for one in three people in the world (FAO). For people living in poverty, 70% live in rural areas and the majority are involved in agriculture (World Bank/Gates Foundation).

At Partners Worldwide, these facts are shaping how we work towards our vision to end poverty through business so that all may have abundant life.

We recently launched a pilot initiative focused on supporting and leveraging the resources of our partners in Africa who were already serving the agricultural sector. This pilot has been our learning lab. We’ve had some failed experiments, while other interventions have led to powerfully positive outcomes. Overall, the results affirm the vital role that agriculture plays in ending poverty.  END_OF_DOCUMENT_TOKEN_TO_BE_REPLACED

Do you have to be a little nuts to give up all the trappings of corporate success, move your family to Mozambique to start a cashew company and pledge to give away 90% of your profits to help orphans and farmers?

More than a few people suggested as much to Don Larson, a former Hershey Company exec who  sold his Porshe, his hot air balloon and his house with a swimming pool to buy a small factory in Matola, Mozambique to launch his social enterprise.

Larson’s Sunshine Nut Company, sells roasted cashews,  grown by small farmers in Mozambique and produced entirely in-country.  The company, which turned its first profit 18 months ago, sold about $2 million worth of cashews last year, and  Larson is projecting $3 million to $5 million in revenue this year.  The nuts can now be found in  some 2,000 U.S. stores,  including Whole Foods and Wegman’s.

More than 30 years ago, Mozambique led the world in cashew production. But, following independence in 1975, 16  years of civil war and bad banking policies decimated the industry. Now, Larson is trying to bring it back – this time, by empowering local communities, paying farmers fairly for their product and creating   jobs with upward mobility for the country’s orphans and abandoned children in Sunshine’s factories. The company is devoting 30% of its net proceeds to support agricultural development and 30% to care for orphans and vulnerable children; another 30% will be directed to expanding to other developing regions, and, eventually, to other crops.

Most social entrepreneurs like to stress their founding story, the goals they hope to accomplish, the motivations that drive everything they do. The product itself? Sometimes, it’s just good enough, but nothing special. The really savvy social entrepreneurs have learned that a sincere mission and a superior product must go hand-in-hand.  END_OF_DOCUMENT_TOKEN_TO_BE_REPLACED

Dan Wiebe grew up in a farming family and started his own poultry business in 1970. With decades of experience behind him, he has more recently connected with the business as mission community and become a mentor to others. We asked him to share a little about his story and some of his advice for those doing BAM in the agriculture sector.

I grew up in a family agri-business as the youngest of 7 children. My father, a second generation Canadian, had taken Teachers Training in the 1920s and by 1940 retired from teaching to manage his farm in the prairies of Manitoba, Canada. In 1949 he moved our family to western Canada to begin intensive farming with poultry.

By 1970 I was ready to begin my own poultry operation with one chicken house and 10,000 chickens. This was a time when poultry became the consumer’s more popular choice over beef.  Not only was the market expanding rapidly because chicken was a healthy alternative to red meat, but the cost of producing chicken dropped significantly as scientific improvements were introduced in nutrition and selective breeding to bring chickens to market much faster. The use of hormones in chicken production has never been legal in North America so chicken is still the safest and healthiest meat available to consumers.

I grew up observing in our own family business ways to involve all segments of a farming enterprise with the support industry in order to produce a better quality and more efficient end product. I used these lessons to integrate my own farming operation into the only fully vertically integrated chicken farm in Canada, from farm to plate.  END_OF_DOCUMENT_TOKEN_TO_BE_REPLACED

In the first half of 2017, we are looking at BAM companies in different industries. We are currently focused on business as mission in the agriculture industry, sharing insights and stories from experienced company owners.

We asked BAMers involved in agriculture:

What advice would you give to someone starting out BAM and wanting to run an agriculture business?

The best advice is always to start small. It is easy to scale up as you gain understanding.  The greatest cause of failure in the industry is getting bigger than you can handle and overextended financially. All of this can be avoided by being realistic in your expectations from the beginning. It is always better to do a small thing well and scale up as time, energy and finances allow. We must remember that agriculture involves a great deal of waiting and trusting God to bring the growth. It often involves much experimentation to get the right things growing in the right place at the right time. Don’t ever trust that there is a “one style fits all” approach. Every place and every situation will bring its own challenges and its own victories. Remember, our God is a God of abundance and if we do things in His way, He will provide the increase. It is important to get a team involved and a good business plan in place. Even on a small scale, we must concentrate on the business side of things. If we don’t, we may end up with a big pile of cucumbers rotting in the yard. – Carl, Caribbean & Asia  END_OF_DOCUMENT_TOKEN_TO_BE_REPLACED

In the first half of 2017, we are looking at BAM companies in different industries. We continue with business as mission in the agriculture industry, sharing insights and stories from experienced company owners.

We asked BAMers involved in agriculture:

What are the advantages of being in the agriculture industry when it comes to doing BAM?

I see three advantages of being in the agricultural industry when it comes to doing BAM. First of all, everybody in the world needs food to eat. Food comes from agriculture. So if somebody has know-how in food production and food preservation it is the best industry for business. Second, it is easy to start in the agricultural industry. In every location there is already existing agricultural activity. No or only few imports are needed. Finally, it is easy to connect to people on the level of food because everybody relates to it. – Decent, Malawi

I think there is a big advantage in that with agriculture most of the grassroots people in your area can relate to you. They can see what you are doing and how it can have direct benefits to them. They can also get involved by utilizing your products on their farm, or learning and implementing what you are introducing, if it is new technology or improved methods. This can impact a huge number of people right there where you are. The people receiving those benefits are those who are working hard to legitimately provide a life and future for their families. If you impact them, and help them, you provide hope. Just like the hope and dignity you give to your employees, this can be multiplied out to the recipients of your product or technology, allowing them to better provide for their families. – Ben, Central Asia  END_OF_DOCUMENT_TOKEN_TO_BE_REPLACED 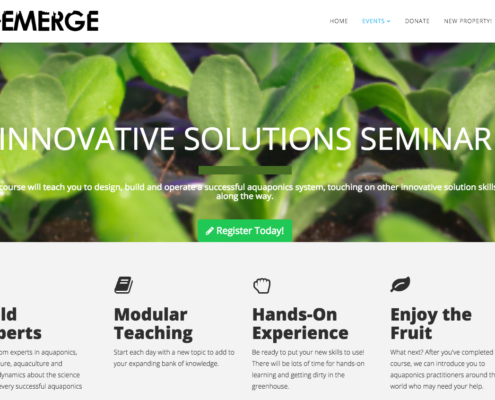