In Part 1 of this blog, we identified four stages you can take to proactively lead your organization through the uncertainty and down the road to recovery.

Once you have taken care of the most urgent tasks in the “Emergency Room” phase, it is time to start treating your business to lead it towards longer term stabilization, recovery and repositioning. 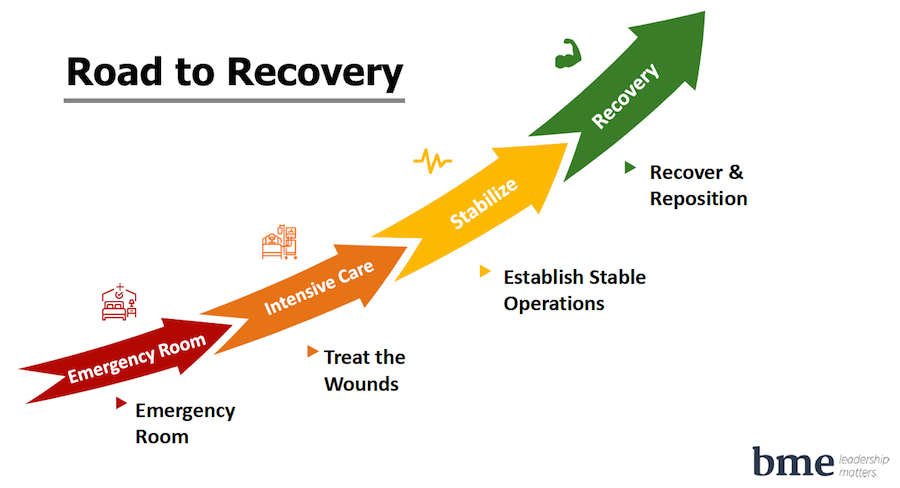 During times of uncertainty, increased communication is vital.

•Who are your key stakeholders?

•What is the best media and approach?

During times of crisis, more care and attention is needed, and development challenges are available.

•What current needs are your employees facing?

•Who can you give development challenges to?

•How can you build your culture during this time?  END_OF_DOCUMENT_TOKEN_TO_BE_REPLACED

If your business has been hit hard by the COVID-19 pandemic, we recommend taking immediate action. Don’t “wait and see” what might transpire.

We have identified four stages you can take to proactively lead your organization through the uncertainty and down the road to recovery.

1. Getting Started in the Emergency Room

Main Priority: Help your leaders and organization recognize the urgency of the times, align to secure the safety of stakeholders and stop the financial bleeding.

Here are some activities for the “Emergency Room” stage of a crisis:

 Avoid inaction and a “wait and see” approach

What is a realistic picture that recognizes there is no certainty on when things will improve?

What will need to change with your communication and meeting cadence?

How deep can your cuts go without inhibiting your ability to recover once stable?  END_OF_DOCUMENT_TOKEN_TO_BE_REPLACED

In the early 1970’s I was living, along with my family, in the Brazilian Amazon port city of Belem where I was the administrator of a school for children of expatriates. The Amazon Valley Academy is a K-12 school following an American curriculum but also in the 1970s and 80s taught a German program for grades 1-10 and tutored British O-level classes.

In the spring of 1974, we noted children getting ill in unusually high numbers and eventually it was determined that Hepatitis A had struck the community. We were forced to close the school and it did not re-open for five weeks.

Hepatitis A is a communicable disease of the liver caused by the hepatitis A virus (HAV). It is usually transmitted person-to-person through the fecal-oral route or consumption of contaminated food or water. Most adults with hepatitis A have symptoms, including fatigue, low appetite, stomach pain, nausea, and jaundice.

But in those days, the doctors did not know any of that. In fact, they theorized that the condition might be caused by a mosquito. And so the government epidemiologists set up tests in the community and on campus to capture and test mosquitos; meanwhile the children from our three boarding homes and others from the community were required to stay home and rest since there was no known cure and no vaccination.

After five weeks had passed most students seemed to be returning to normal health so we decided to re-open the school and most of the children returned. But then another emergency – most of the teachers got sick – yes – Hepatitis A. What should we do now?

There were a few teachers and myself (I was the high school principal at the time) who had escaped infection. As we sat around one evening thinking and praying through some options, one of the math teachers came up with an idea. “Let’s take high school seniors and juniors and use their strengths to teach the middle school students” he said. We settled on Charles to lead the science teaching team, John to lead the history team, Bruce to lead the math team and Anita to lead the English language team.  END_OF_DOCUMENT_TOKEN_TO_BE_REPLACED