What would you say were the most important things to prepare or think about as I approach a BAM investor? What are some typical pitfalls or mistakes I could avoid?

Funding for your new business is obviously crucial – no cash, no business. So let’s think about this from an investor’s perspective. What is it that interests him or her? What does he or she want to see? What questions answered?

Here’s what I’d be asking: What exactly is the product or service that you intend to sell? Don’t assume that I understand it. Make it simple for me. What is the market demand for this? Do people really need/want your product or service? Who will your competitors be? How is your idea better than and different from theirs?

This first set of questions is about your viability in the market place. Is this a real business? The next set of questions is about you. Can I count on you? What is your background? Why are you particularly qualified to launch a business like this one? Do you have a specific knowledge base or experience that would give me confidence that you can actually pull this off? Who do you have around you? What is your track record? Who will vouch for your character? Your commitment to Christ?

END_OF_DOCUMENT_TOKEN_TO_BE_REPLACED

It’s not news: Getting a job is probably the most basic way to get out of poverty. That’s why I’m amazed by the fact that in Christianity Today’s list of top 10 poverty alleviation strategies, only one directly involves job creation (microfinance)… These solutions are critically important, but primarily address poverty’s symptoms instead of its root cause. They also emphasize what “we” can provide instead of recognizing that imported solutions rarely last.

END_OF_DOCUMENT_TOKEN_TO_BE_REPLACED 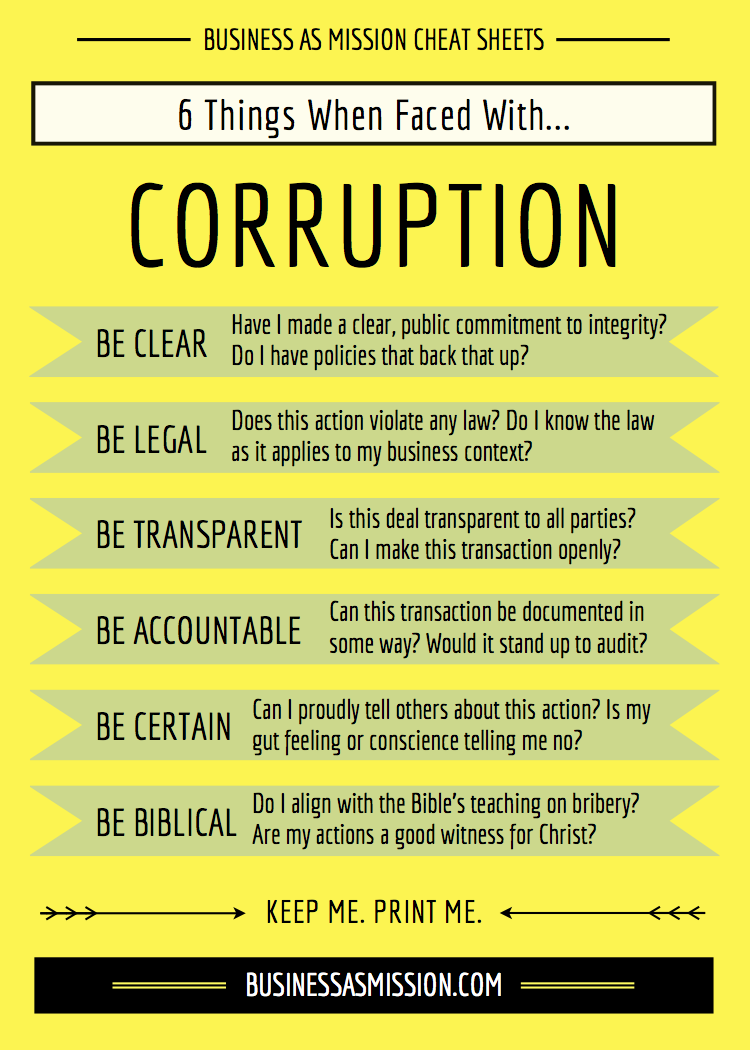 With thanks to Larry Sharp and Dwight Nordstrom.

We’ve had situations where we’ve lost business over refusing to pay a bribe. We had a speciality chemical and the representative in a wholly-owned German company asked for a 5% kickback, with 1% going into a personal account. That was a million dollar plus account per year and I don’t even know now six years later if we’ve ever recovered the value of the account. END_OF_DOCUMENT_TOKEN_TO_BE_REPLACED

Yet in spite of these sincere efforts, corruption behind the scenes is still all too prevalent. A spokesman for the Dutch embassy, who wished to remain anonymous, stated that recently a Dutch company took Kazakhstan up on its attractive offer. However, shortly after completion of their new facility, Kazakhstan “inspectors” found a piece of machinery in violation to some obscure code. As a result the Dutch company had their investment subsidy rescinded and were fined 40% of their investment for a penalty. Similarly, a German businessman stated that German companies are still hesitant to invest substantially because of the routine problems of corruption and bureaucracy.    END_OF_DOCUMENT_TOKEN_TO_BE_REPLACED

Insights from a BAM Practitioner

Dwight Nordstrom is a veteran of doing business in Asia for almost 30 years. He is on a continuing journey of learning how to deal with bribery and corruption as he leads Pacific Resources International, to expand manufacturing operations in China.

Don’t make blanket statements about bribery and corruption.
This issue is simple, yet complex! It is good practice to talk about individual cases versus making unilateral statements. Brainstorm with others. Ask, What does this mean in this context?  Is there a different way we could do this? Is there a way we could still win this business?

Be incredibly selective about what industry and type of business you get into.
There are a lot of businesses I wouldn’t touch because it is such a corrupt industry. Select the type of industry very carefully since that will determine how much corruption you will face. Build your competency in an industry that is less corrupt before taking on business in more corrupt sectors.

Posts and resources from the marketplace ministries movement.

Entrepreneurship within a Biblical Worldview – Institute for Faith, Work and Economics

Christians have a somewhat schizophrenic view of entrepreneurs. We see them as something of a necessary evil; we recognize their value to some extent but also view them with skepticism and distrust, especially those who become wealthy. They are frequently viewed in a certain accusatory way, as though their wealth has come at the expense of others. This view stems from an incomplete understanding of what entrepreneurs do, how they function, and the role they play in God’s order. Entrepreneurs are vital to fulfilling God’s purpose. They are creative people who provide people with a way of serving others. In that sense, they display a divine characteristic.

END_OF_DOCUMENT_TOKEN_TO_BE_REPLACED

Corruption is defined as the misuse of power by someone to whom it has been entrusted, for their own private gain. The most common form of corruption is bribery, which is defined as the giving or receiving of money, a gift or other advantage as an inducement to do something that is dishonest, illegal or a breach of trust in the course of doing business.1

Corruption is one of the biggest issues that business people face globally today, and is a highly relevant topic for business as mission practitioners – Joseph Vijayam, Director of Olive Tech, a BAM company in India and the USA.

Bribery and corruption not only represent a significant risk for your company, but keep millions in poverty.

“[Corruption] constitutes a major obstacle to reducing poverty, inequality and infant mortality in emerging economies” according to Daniel Kaufmann, the World Bank Institute’s director for Governance.2 According to World Bank Institute (WBI) research, more than $1 trillion dollars (US$1,000 billion) is paid in bribes each year. This US$1 trillion figure is an estimate of actual bribes paid worldwide in both rich and developing countries and does not include embezzlement of public funds or theft of public assets. WBI research also shows that countries that tackle corruption and improve their rule of law can increase their national incomes by as much as four times in the long term, and child mortality can fall as much as 75 percent.2

Christian Aid predicted in 2008 that illegal, trade-related tax evasion alone will be responsible for some 5.6 million deaths of young children in the developing world between 2000 and 2015. That is almost 1,000 a day.3 However, corruption is not just happening in the developing world. END_OF_DOCUMENT_TOKEN_TO_BE_REPLACED

My customs broker tells me I have to give a gift to the customs officials to get our materials out of customs. He said it’s standard, no big deal. I asked the pastor at our local church and he said it would be terrible to pay a bribe like that – it’s illegal and gives a very bad lesson to others.  I’m new in the business and to importing here, and our business may fold if I can’t get this out soon. Is this a time to die for my principles or should I go with “when in Rome, do as the Romans do”?

Over which principle are you considering ‘dying’?  Is it God’s call to honesty? Or is it obedience to the local church and, if so, is the church correct?  I suspect that untangling the issues will help.

It sounds like you live in one of the many countries where written law differs from applied law. That’s how speed laws work in the UK, incidentally – they are applied, but not strictly. Most western country laws against foreign bribery make an explicit exclusion for “expediting payment”, which morally can be classified as extortion by the official who is withholding your legal rights until he or she gets their bribe. That’s fundamentally different from bribing an official to get something for which you don’t have the right. Paying an extortionist is generally a bad idea, but it’s on a different moral level than bribery. I wouldn’t die over an extortionists demand. END_OF_DOCUMENT_TOKEN_TO_BE_REPLACED